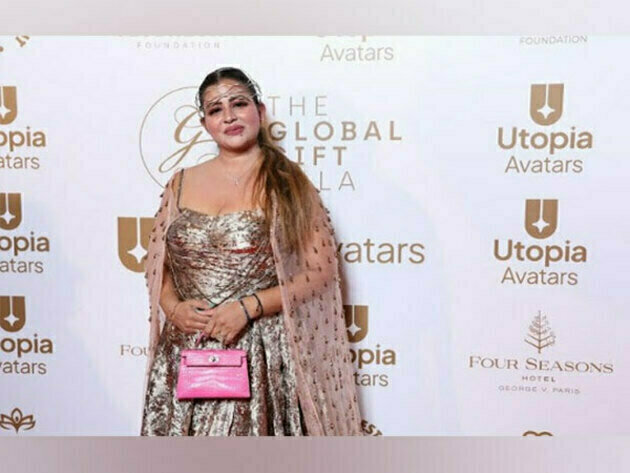 The magical night was hosted by Eva Longoria and Maria Bravo.

Representing India at this landmark event, was none other than billionaire philanthropist Sudha Reddy of the MEIL Group, Hyderabad who made heads turn with her articulate appearance. Known for her eclectic fashion sense, she donned a bespoke Neeta Lulla gown for the gala.

The leading lady of Hyderabad is often spotted in the company of Paris Hilton, Eva Longoria, Elizabeth Hurley, Anna Wintour and a galaxy of Hollywood stars and the world's most influential leaders.

From the Global Gift Gala to the MET Gala, Paris Couture Week and the First Ladies Luncheon - Sudha Reddy has spared no effort in leaving a mark with her stand-out red-carpet appearances. One of the leading business tycoons of India, a global fashion icon, socialite, art enthusiast and globe trotter, Sudha Reddy gets into the distinct roles with such elan that she stuns the world in everything that she does.

Yet the illustrious industrialist is most beloved for her endeavours in philanthropy and empowerment. The humanitarian who leads with her heart helms the corporate social responsibility initiatives of Megha Group of Industries driving several social impact projects across India, while the eponymous Sudha Reddy Foundation aims to support women and children focusing on affordable healthcare and accessible education.

On account of her robust charitable endeavours and being a true source of inspiration within the global philanthropy circles, Reddy was invited and empanelled into the family of Global Gifters as one of the Global Ambassadors of the Global Gift Foundation, making her the very first Hyderabadi to receive such an exemplary honour. She joins the ranks of global celebrities like Ricky Martin, David Beckham, Gordon Ramsay, Cristiano Ronaldo, Pitbull, Jane Fonda, Halle Berry, Will I AM, Huda Kattan, Meghan Markle, Alec Baldwin, Goldie Hawn, Pamela Anderson amongst others.

Sudha Reddy shares, "I am very delighted to now be formally associated with the Global Gift Foundation as one of their patrons from India. It was such an insightful evening, meeting such noble-minded dignitaries and convening together to see how each one of us can create real-time impact and change in the world. I am looking forward to my new responsibilities as a global campaigner to reinforce the social consciousness of society and mobilize resources."

During her visit, she was also spotted attending the Ceremonial Service for the most excellent order of the British Empire and exchanging pleasantries with members of the royal family at St. Paul's Cathedral in London as well at a spiritual awakening event hosted by Lola Tillyyaeva and the Human Kind Institute in Paris.

This story has been provided by NewsVoir. ANI will not be responsible in any way for the content of this article. (ANI/NewsVoir)

SAN Francisco, California: As he struggles with a mass exodus of advertisers and users switching to other platforms, Twitter Chief ...

TOKYO, Japan: Japanese prosecutors raided the headquarters of advertising company Dentsu, as part of a widening investigation into corruption during ...

NEW YORK, New York - Concern about the spreading of Covid-19 across China kept investors on edge Monday, with all ...

LONDON, England: The UK National Crime Agency has obtained a civil recovery order for some $65 million of suspected criminal ...